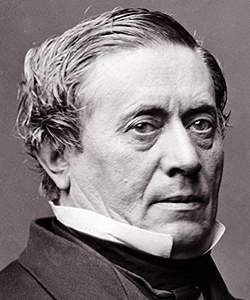 Joseph Henry, physicist and Princeton University professor, was the first secretary of the Smithsonian Institution in Washington, DC. Born on December 17, 1797 in Albany, New York Henry was the son of a teamster who discovered the world of science when he picked up Lectures on Experimental Philosophy, Astronomy, and Chemistry (1808) as a sixteen-year-old. Although Henry’s only formal schooling was the three years he spent at Albany Academy beginning in 1819, the College of New Jersey (Princeton University) hired Henry as a professor of natural philosophy in 1832. Two years previously, Joseph Henry married his cousin Harriet Alexander and the Henry’s had four children together. Throughout his professional career Henry focused his research on electromagnetism, heat, and light. Henry’s background in scientific research influenced his ideas for the direction of the Smithsonian. When the Board of Regents chose Henry as the institution’s secretary on December 3, 1846, they were still determining what James Smithson’s bequest would fund. Under Henry’s leadership, the Smithsonian developed a separate national museum for natural specimens, moved away from acting as a traditional library, and eventually its scope as an outgrowth of the many scientific publications, research, and explorations that the institution funded. Henry remained the secretary of the Smithsonian until his death on May 13, 1878. The standard biography on Joseph Henry is Thomas Coulson’s 1950 Joseph Henry: His Life and Work. Henry’s papers are published in a fifteen-volume set with a separate two-volume edition for his scientific publications. (By Rebecca Solnit)
Life Span
12/17/1797 to 05/13/1878
How to Cite This Page: "Henry, Joseph," House Divided: The Civil War Research Engine at Dickinson College, https://hd.housedivided.dickinson.edu/node/32938.