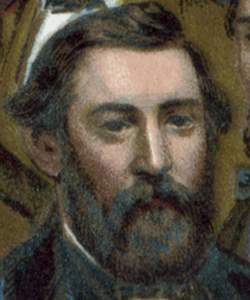 William M. Cooper, the eventual head of the Cooper Shop Volunteer Refreshment Saloon, was born around 1811. Cooper originally worked a merchant and co-owned a storefront on Otsego Street in Philadelphia, Pennsylvania with his business partner, H.W. Pearce. The shop was used as a cooperage to manufacture shooks for the sugar trade with the West Indies. After the outbreak of the Civil War in 1861, Philadelphia became a stopping place for the Union troops and Cooper decided to dedicate his store to the service and care of the soldiers. He initiated the Cooper Shop Volunteer Refreshment Saloon by using products from his own house for provisions and it officially opened on May 26, 1861 and served Colonel Blenker’s 8th New York Regiment the following morning. Cooper received the appointment as president of the Cooper Shop Committee and his responsibilities included presiding over the meetings and making sure the store was stocked with provisions for the incoming troops. He remained in this position throughout the entire duration of the war. Under Cooper’s leadership, the shop served and cared for about four hundred thousand Union soldiers. He tried to return to the sugar trade business after the war, but was unsuccessful. William M. Cooper died in poverty at sixty-nine years old in February 1880 and was survived by his wife, daughter, and granddaughter. (By Brenna McKelvey)
Life Span
01/01/1811 to 02/03/1880
How to Cite This Page: "Cooper, William M.," House Divided: The Civil War Research Engine at Dickinson College, https://hd.housedivided.dickinson.edu/node/33454.