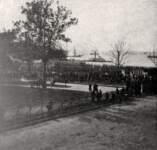 10/11/1860 - 10/14/1860
In a highlight of his visit to the United States, the Prince of Wales arrived in New York City for three days.  Soon after he landed he inspected the New York Militia at the Battery and progressed through huge crowds up Broadway.  In the following days he toured New York University and the Cooper Union, attended a massive Grand Ball at the Academy of Music, and watched from his hotel balcony as hundreds of New York firemen marched past in a torch-lit parade.  He left for West Point, New York on October 15, 1860.  (By John Osborne)
Source Citation
Henry James Morgan, The Tour of H.R.H. the Prince of Wales through British America and the United States (Montreal: John Lovell, 1861), 201-203.
How to Cite This Page: "The Prince of Wales spends three busy days in New York City," House Divided: The Civil War Research Engine at Dickinson College, https://hd.housedivided.dickinson.edu/node/33995.