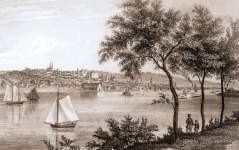 10/16/1860
After touring the U.S. Military Academy at West Point, the Prince of Wales and his party continued up the Hudson River to visit Albany, New York at the invitation of Governor Edwin D. Morgan.  He was enthusiastically received at the dock, attended an official dinner at the Governor's Mansion, and spent the night at the Congress Hall Hotel.  The party left for Boston, Massachusetts by train the next morning.   (By John Osborne)
Source Citation
Henry James Morgan, The Tour of H.R.H. the Prince of Wales through British America and the United States (Montreal: John Lovell, 1861), 204.
How to Cite This Page: "The Prince of Wales visits Albany, New York ," House Divided: The Civil War Research Engine at Dickinson College, https://hd.housedivided.dickinson.edu/node/34071.