In Columbia, South Carolina's Convention on secession opens with a morning session 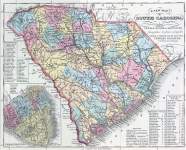 12/17/1860
The South Carolina Convention on secession met for the first time in Columbia, South Carolina on the morning of December 17, 1860 in the Baptist Church.  David F. Jamison was elected to the chair.  Delegates, it was observed, were mostly elderly and distinguished men, including five former governors of the state, four former U.S. senators, a former speaker of the U.S. House, leading clergy, and many federal and state judges, including John Inglis, a native of Maryland, class of 1829 at Dickinson College.  (By John Osborne)
Source Citation
Samuel Wylie Crawford, The Genesis of the Civil War: The Story of Sumter, 1860-1861 (New York: Charles L. Webster and Company, 1887), 45-47.
How to Cite This Page: "In Columbia, South Carolina's Convention on secession opens with a morning session ," House Divided: The Civil War Research Engine at Dickinson College, https://hd.housedivided.dickinson.edu/node/34783.