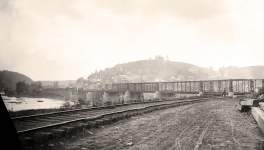 06/14/1861
Major General George McClellan led a large Union force from Ohio into western Virginia forcing the Virginians to give up the towns along the Potomac, including Harpers Ferry. Confederate troops burned the railroad bridge there and at Martinsburg, as well as the bridge at Shepherdstown as they withdrew.  Railroad stock and machineshops at the Martinsburg depot of the Baltimore and Ohio Railroad were also destroyed in the retreat.  (By John Osborne)
Source Citation
Chronicles of the Great Rebellion Against the United States of America (Philadelphia, PA: A. Winch, 1867), 8.
How to Cite This Page: "Confederate forces evacuate Harpers Ferry and other western Virginia towns along the Potomac," House Divided: The Civil War Research Engine at Dickinson College, https://hd.housedivided.dickinson.edu/node/37884.