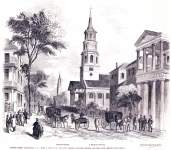 12/11/1861 - 12/12/1861
At around 8:30 p.m., a fire broke out in a sash and blind factory on Hasell Street in Charleston, South Carolina and quickly spread thanks to a strong north-west wind.  By the time it burned itself out it had destroyed 575 structures and scorched 540 acres, around a third of the city.  Among the buildings completely destroyed were St. Andrew's Hall on Broad, where the Secession Convention had met, and the Institute Hall nearby, where the Ordinance of Secession had been signed. Recovery was long and slow during the war years.  (By John Osborne)
Source Citation
Walter J. Frazier, Charleston! Charleston!: The History of a Southern City (Columbia, SC: University of South Carolina Press, 1991), 253-255.
How to Cite This Page: "A devastating fire destroys a third of Charleston, South Carolina destroying hundreds of historic buildings," House Divided: The Civil War Research Engine at Dickinson College, https://hd.housedivided.dickinson.edu/node/38508.