In billiards, Michael Foley wins his much anticipated return match with Dudley Kavanaugh 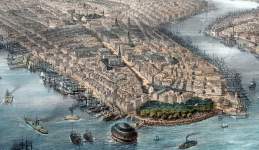 04/04/1862 - 04/05/1862
Before a packed house at Irving Hall in New York City, the much anticipated return billiards match between between two of the country's leading players, Dudley Kavanaugh of New York and Michael Foley of Cleveland, Ohio, resulted in a victory in the early hours of the morning for the visiting Foley.  The two had met in March 1862 in Cleveland for a previous $500 a side match which Kavenaugh had won. (By John Osborne)
Source Citation
"The Great Billiard Tournament," New York Times, April 5, 1862
How to Cite This Page: "In billiards, Michael Foley wins his much anticipated return match with Dudley Kavanaugh," House Divided: The Civil War Research Engine at Dickinson College, https://hd.housedivided.dickinson.edu/node/39009.