The U.S. Congress completes a bill to establish a new mint in Denver, Colorado 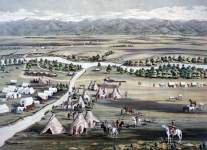 04/21/1862
Congress voted to establish a branch mint in Denver, Colorado, appropriating $75,000 and purchasing the building of the private company that had been minting coins and ingots there.  The facility opened on September 24, 1863, however, only as an assay office.  So it remained until 1904 when a new full minting facility was built.  It first struck coins in February 1906 and in 2012 was the world's largest producer of coinage.  (By John Osborne)
Source Citation
George G. Evans, Illustrated History of the United States Mint: with short historical sketches and illustrations ...(Philadelphia, PA: George G. Evans Publishers, 1893), 170.
How to Cite This Page: "The U.S. Congress completes a bill to establish a new mint in Denver, Colorado," House Divided: The Civil War Research Engine at Dickinson College, https://hd.housedivided.dickinson.edu/node/39056.