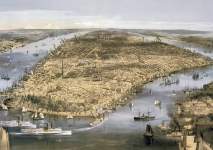 05/29/1862
For New York, the 1862 horse racing and trotting season got underway at the Union Course just east of the city on Long Island with harness racing. The centerpiece on a fine day was a match race for an $800 prize between the mare Sunnyside and a gray gelding called Ed Eddy over a mile, best three heats out of five.  Racing began at 4 p.m. with James McCann driving Ed Eddy to win all three heats before a large crowd. (By John Osborne)
Source Citation
"The Turf: First Day on the Union Course," New York Times, May 30, 1862, p. 8.
How to Cite This Page: "The harness racing season opens in New York City with a $800 match race on Long Island," House Divided: The Civil War Research Engine at Dickinson College, https://hd.housedivided.dickinson.edu/node/39133.