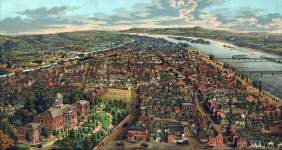 05/25/1863
Several soldiers from Camp Curtin were drinking in a bar behind the State Capitol and got into a disagreement with the black proprietor.  The men were arrested but not charged.  Meanwhile, however, their comrades from camp flooded into the city, wrecked the bar, and then, after pistol shots were exchanged, began to attack nearby black dwellings.  The rioters caused significant damage but no serious casualties were reported.  (By John Osborne)
Source Citation
"A Negro Riot in Harrisburgh," New York Times, May 31, 1863, p. 6.
How to Cite This Page: "In Harrisburg, Pennsylvania, white soldiers smash up African-American dwellings and establishments," House Divided: The Civil War Research Engine at Dickinson College, https://hd.housedivided.dickinson.edu/node/39542.