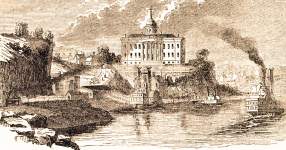 06/27/1863
In the Missouri State Convention meeting in Jefferson City, Missouri, the hammering out of a final resolution on the future of slavery in the state continued.  Amendments that reduced the ending date for slavery from July 4, 1876 to July 4, 1868 were carried by a final vote of 51 to 32.  The measure, which provided compensation for slaveholders, was radically changed the following year when Radical Republicans took control of the state.  (By John Osborne)
Source Citation
"The Missouri Convention: Slavery to End In Missouri ...," Chicago Tribune, June 30, 1863, p. 1.
How to Cite This Page: "Missouri Convention is hammering out a resolution to end slavery and compensate slaveowners," House Divided: The Civil War Research Engine at Dickinson College, https://hd.housedivided.dickinson.edu/node/39957.