Union cavalry capture Culpeper, Virginia after a sharp mounted action through the town 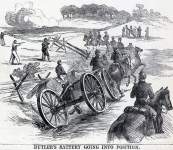 09/13/1863
The day before, the entire cavalry corps of the Army of the Potomac had crossed the Rappahannock River aiming at Confederate cavalry headquarters at Culpeper, Virginia.  Three columns of the force, commanded by General Pleasonton, advanced on the town itself in the early afternoon and after a series of charges through the town, including one by the Michigan Brigade, led by Brigadier General Custer, took possession. Casualties were relatively light on both sides.  (By John Osborne)
Source Citation
Gregory J. W. Urwin, Custer Victorious: The Civil War Battles of General George Armstrong Custer  (Lincoln, NE: University of Nebraska Press, 1990), 96-98.
How to Cite This Page: "Union cavalry capture Culpeper, Virginia after a sharp mounted action through the town," House Divided: The Civil War Research Engine at Dickinson College, https://hd.housedivided.dickinson.edu/node/41135.