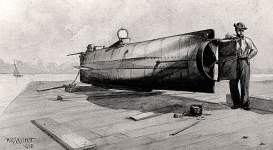 08/29/1863
After a fatal training accident six weeks before, the experimental Confederate submarine H.L. Hunley, 40 feet long with a crew of eight using hand cranks for propulsion, was raised and had resumed its trials in Charleston Harbor for use against the Union blockade.  Disaster again struck, though, when the vessel failed to surface, drowning all aboard, including its designer, H.L. Hunley. The Hunley was raised and did carry out a successful attack the following February but was lost, finally this time, with all hands.  (by John Osborne)
Source Citation
Shane Mountjoy, Technology in the Civil War (New York: Infobase Publishing, 2008), 82-83.
How to Cite This Page: "An experimental Confederate submarine sinks in Charleston Harbor during a training accident, killing five," House Divided: The Civil War Research Engine at Dickinson College, https://hd.housedivided.dickinson.edu/node/41426.