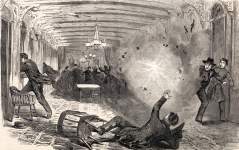 11/11/1863
The Mississippi River may have been opened for Union steamboat traffic but the route was still hazardous.  The steamboat Welcome was hit by shells and rifle fire from the bank near Waterproof, Louisiana, below Vicksburg. at around eight in the evening as she made her way from St. Louis to New Orleans.  An estimated eleven shells and 100 rifle bullets hit the vessel but although a few were injured, no fatalities were reported.  (By John Osborne)
Source Citation
"Explosion of a Shell - In the Ladies' Saloon of the steamer Welcome," Frank Leslie's Illustrated, January 2, 1864, p. 225.
How to Cite This Page: "Steamer from St. Louis to New Orleans attacked below Vicksburg, Mississippi," House Divided: The Civil War Research Engine at Dickinson College, https://hd.housedivided.dickinson.edu/node/41469.