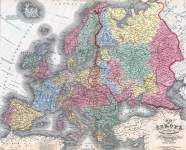 05/09/1864
The Second Schleswig War saw the Danish Navy control the North Sea.  An Austrian squadron was organised and appeared in the English Channel in early May. A smaller Danish squadron met the Austrians, and their Prussian allies off the British island of Heligoland in the afternoon and after a sharp action, forced them to withdraw. The six-month war, however, ended in defeat for the Danes in July 1864.  (By John Osborne)
Source Citation
Michael Embree, Bismarck's First War: The Campaign of Schleswig and Jutland 1864 (Solihull, England: Helion and Company, Ltd, 2007), 282-285.
How to Cite This Page: "Danish and Austrian naval units clash in the North Sea at the Battle of Heligoland," House Divided: The Civil War Research Engine at Dickinson College, https://hd.housedivided.dickinson.edu/node/41600.