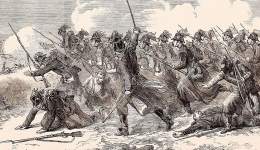 02/03/1864
Two days before, 20,000 Austrian and 25,000 Prussian troops of the German Federation had crossed into the disputed Danish province of Schleswig to open the six month war against Denmark.  Danish troops had clashed with the Prussians the next day and then on this day fought two running battles against the Austrians at Jagel and Overselk.  The outnumbered Danes could only put up limited resistance and were forced to retreat.  (By John Osborne)
Source Citation
Edwin Emerson, Marion Mills Mille, The Nineteenth Century and After: A History Year by Year ... (New York: P.F. Collier & Son, 1910), III:909.
How to Cite This Page: "In Schleswig, Danish troops fight their first battles against invading Austrians," House Divided: The Civil War Research Engine at Dickinson College, https://hd.housedivided.dickinson.edu/node/41640.