In Richmond, 109 Union officers prisoners tunnel out of confinement and make for the Union lines 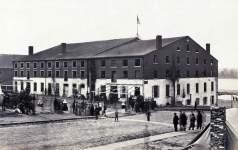 02/09/1864 - 02/10/1864
During the night, 109 Union officers tunnelled out of the notorious Libby Prison into the streets of Richmond, Virginia in one of the largest mass escapes of the war.  Given a start by comrades in Libby keeping their departure secret for as long as they could, and with many knowing the terrain from earlier campaigns, fifty nine escapees reached Union lines. Forty eight others were recaptured and two drowned crossing a river.  (By John Osborne)
Source Citation
Joseph Wheelan, Libby Prison Breakout: The Daring Escape from the Notorious Civil War Prison (New York: Public Affairs, 2010), 169-172.
How to Cite This Page: "In Richmond, 109 Union officers prisoners tunnel out of confinement and make for the Union lines," House Divided: The Civil War Research Engine at Dickinson College, https://hd.housedivided.dickinson.edu/node/41677.