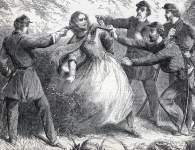 05/10/1865
Jefferson Davis and his wife and children, along with John Reagan were fleeing towards the Gulf of Mexico.  South of Macon, near Irwinville, Georgia two groups of Union cavalry, after a confusing clash that killed two soldiers, converved on the fugitive camp and captured the entire group. Union claims that Davis was apprehended disguised as a woman are disputed. Davis was taken to Savannah and then on to Fortress Monroe in Virginia, by sea. (By John Osborne)
Source Citation
Benson J. Lossing, The Pictorial Field Book of the Civil War in the United States of America (Hartford, CT: T. Belnap, 1874), 578.
How to Cite This Page: "Union cavalry capture the fleeing Confederate President Jefferson Davis and his family south of Macon, Georgia," House Divided: The Civil War Research Engine at Dickinson College, https://hd.housedivided.dickinson.edu/node/43984.