In Lincoln County, Georgia, bandits make off with $250,000 of the last of the Confederate gold reserves 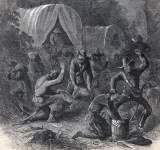 05/24/1865
A significant amount of gold had accompanied Jefferson Davis from Richmond in the last days of the Confederacy.  A portion of that specie was being transported back to Virginia from Washington, Georgia when former Confederate guerillas attacked the wagons at an overnight stop in Lincoln County, Georgia.  The bandits made off with around a quarter of a million dollars in gold, most of which was never recovered.  (By John Osborne)
Source Citation
"Robbery of Richmond Gold," Frank Leslie's Illustrated Newspaper, July 8, 1865, p. 253.
How to Cite This Page: "In Lincoln County, Georgia, bandits make off with $250,000 of the last of the Confederate gold reserves," House Divided: The Civil War Research Engine at Dickinson College, https://hd.housedivided.dickinson.edu/node/44131.