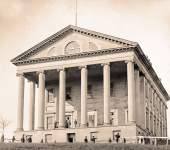 06/21/1865
In a move that angered Uinionists and Radical Republicans in Virginia, the provisional Virginia legislature, sitting in Richmond for the first time, made several conciliatory adjustments to state regulations.  These included most importantly, the replacement of the loyalty "Alexandria Oath" with the far less restrictive "United States Amnesty Oath."  The result was an early return of former Confedarates to state government and trouble with Union authorities.  (By John Osborne)
Source Citation
Chronicles of the Great Rebellion Against the United States of America (Philadelphia, PA: A. Winch, 1867), 108.
How to Cite This Page: "The new Virginia legislature replaces the restrictive Alexandria Oath with the milder Amnesty Oath," House Divided: The Civil War Research Engine at Dickinson College, https://hd.housedivided.dickinson.edu/node/44213.