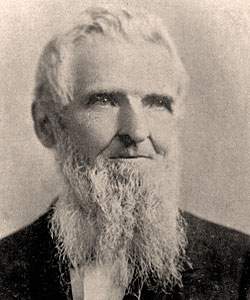 A man with an excellent claim to be the first abolitionist minister in Ohio, James Gilliland was born in North Carolina, the son of a farmer who had been a Revolutionary soldier and who owned at least one slave. He grew up in South Carolina and returned there after his college years in Pennsylvania to take up a position as pastor of a Presbyterian congregation in Belton, South Carolina on September 26, 1794. His anti-slavery views, however, eventually saw him dismissed from that post in April 1804, and he made his way via Kentucky to Red Oak in Brown County, Ohio. There he became pastor of the local Presbyterian church in November 1804 and served it for thirty-seven years, always with his anti-slavery views of "immediatism," (as opposed to "gradualism") to the fore, most notably with a pastoral letter, written with Samuel Crothers, on the evils of the institution that was printed and widely distributed across the North. Tall and erect, with blue eyes, he was by all accounts a fine preacher and a "very humble and modest man." Known later in life as "Father" Gilliland, it is little surprise that Brown County, under his influence, became a prominent stop on the "Underground Railroad." He survived typhoid in 1818 and died in 1845 at his home in Red Oak. He was seventy-six years old. (By John Osborne)
Life Span
10/28/1769 to 02/01/1845
Dickinson Connection
Class of 1792
How to Cite This Page: "Gilliland, James M.," House Divided: The Civil War Research Engine at Dickinson College, https://hd.housedivided.dickinson.edu/node/44245.