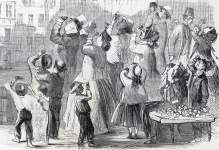 10/19/1865
A lunar eclipse of the Sun was visible over much of the eastern United States, despite the region enduring clouded skies.  The eclipse was at its greatest in mid-morning and in Chicago, Illinois across to Richmond, Virginia was almost annular, or centrally covering much of the Sun.  In New York City, seventy-five percent of the Sun's light was blocked in a partial eclipse watched by hundreds of interested citizens.  (By John Osborne)
Source Citation
"The Eclipse," Harper's Weekly Magazine, November 4, 1865, p. 692.
How to Cite This Page: "A significant lunar eclipse of the Sun is visible in the morning over much of the eastern United States," House Divided: The Civil War Research Engine at Dickinson College, https://hd.housedivided.dickinson.edu/node/44532.