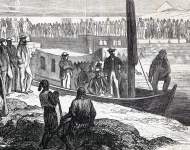 08/15/1865
A small vessel loaded with coal became the first to cross from the Mediterrean Sea to the Red Sea in the newly completed Suez Canal.  Much work remained to be done, however, as the passage could only take boats with a six foot draft. The canal as known today, capable of taking full-size vessels was opened under French control in November 17, 1869.  (By John Osborne)
Source Citation
The American Annual Cyclopaedia and Register of Important Events of the Year and Register of Important Events of the year 1865, Volume 5 (New York: D. Appleton & Company, 1869), 768.
How to Cite This Page: "The Suez Canal sees the first small vessel transit from the Mediterranean to the Red Sea," House Divided: The Civil War Research Engine at Dickinson College, https://hd.housedivided.dickinson.edu/node/44649.