Catholic Bishop accosted and wounded by highwaymen near Cincinnati, Ohio 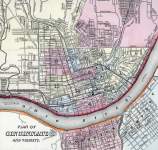 12/23/1865
Syvester Horton Rosecrans was the youngest brother of Civil War General William Rosecrans who had converted to Catholicism at the same time as his brother.  Sylvester rose to become the first Catholic bishop of Columbus, Ohio.  On the Saturday before Christmas, walking home from the cathedral in Cincinnati to his home at Sedamsville, two men demanded his money and fired at him when he ran.  He was hit in the leg but the wound was not serious and he was able to escape.  (By John Osborne)
Source Citation
"Bishop Rosecrans attacked by Highwaymen," New York Times, December 31, 1865, p. 2.
How to Cite This Page: "Catholic Bishop accosted and wounded by highwaymen near Cincinnati, Ohio," House Divided: The Civil War Research Engine at Dickinson College, https://hd.housedivided.dickinson.edu/node/44794.