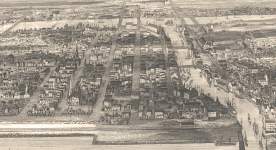 03/15/1866
Miss Susannah Evans, a Welsh temperance advocate, began making appearances in the United States during the later years of the Civil War, while still fifteen years old.  When she spoke in Chicago on this day, at the Smith and Nixon's Hall in Chicago, she was still just seventeen and one of the most sought after temperance lecturers on either side of the Atlantic.  (By John Osborne)
Source Citation
"Miss Susannah Evans," Chicago Tribune, March 14, 1866, p. 4.
How to Cite This Page: "Susannah Evans, the famous Welsh teenage temperance advocate, speaks in Chicago, Illinois," House Divided: The Civil War Research Engine at Dickinson College, https://hd.housedivided.dickinson.edu/node/45313.