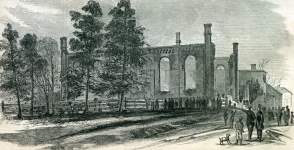 05/01/1866
Under cover of darkness, a series of arson attacks was made on African-American churches in Petersburg in the early hours of the morning.  The Union Street Methodist Sunday School was the first target, followed soon after by the African Baptist Church on Harrison Street, which was completed destroyed.  Two other church school rooms and offices were then burned.  No injuries were reported. (By John Osborne)
Source Citation
"Burning of Churches in Petersburg," Harper's Weekly Magazine,  May 19, 1866, p. 317.
How to Cite This Page: "Nighttime arson attacks burn several African-American churches and church buildings in Petersburg, Virginia," House Divided: The Civil War Research Engine at Dickinson College, https://hd.housedivided.dickinson.edu/node/45405.