Two more African-American regiments, the soon to be famous Ninth and Tenth Cavalry, come into being 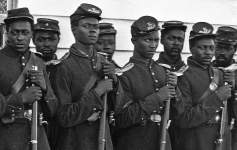 Under the reorganization of the post-war U.S. Army, two regiments of African-American Cavalry had been authorized and on this day the 9th and 10th U.S. Cavalry regiments came into being.  The Ninth was organized in Louisiana under Colonel Edward Hatch and the Tenth at Fort Leavenworth, Kansas, under Colonel Benjamin Grierson.  All enlisted men were black and all officers were white.  The two regiments served through the Indian Wars, gaining the nickname "Buffalo Soldiers," and also fought in Cuba during the Spanish-American War.  (By John Osborne)

How to Cite This Page: "Two more African-American regiments, the soon to be famous Ninth and Tenth Cavalry, come into being," House Divided: The Civil War Research Engine at Dickinson College, https://hd.housedivided.dickinson.edu/node/45667.