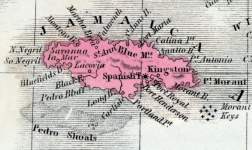 During the brutal putting down of the October 1865 insurrection in Jamaica, Colonel Thomas Hobbs had commanded British troops at Monklands that destroyed houses and summarily executed more than a dozen black Jamaicans by firing squad.  Reportedly a cultured and sensitive man, his guilt and the criticism he had received at the hands of the subsequent Royal Commission had unhinged his mind and he was being returned home escorted by medical personnel, his wife, and three children.  Aboard the island ferry steamer Tyne off the coast of Haiti, however, he slipped away, threw himself overboard, and drowned.  (By John Osborne)