The Freedmen's Bureau halts the free issue of rations to refugees and freedmen across the South. 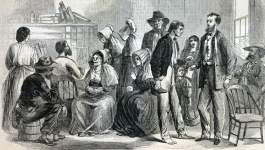 Effective this date, the War Department's Bureau of Refugees, Freedmen, and Abandoned Lands halted free distribution of relief rations to individuals across the South except in the most dire circumstances. Between June 1, 1865 and September 1, 1866, according to government figures, almost 30,000 rations per day had been issued, for a total number of 13,412,263 individual sets, roughly divided between white refugees and newly freed slaves. Emerging public perceptions of "handouts" harmful to the work ethic of newly freed slaves across the region helped force the end of the practice.  (By John Osborne)

How to Cite This Page: "The Freedmen's Bureau halts the free issue of rations to refugees and freedmen across the South.," House Divided: The Civil War Research Engine at Dickinson College, https://hd.housedivided.dickinson.edu/node/45935.