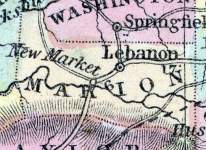 During the night, near Lebanon, a town in central Kentucky, a large band of mounted nightriders, well organized and reportedly directed with cavalry bugle calls, terrorized the local black population with the goal of driving them out of the area.  More than a hundred horsemen, know as "Skaag's men" after their leader's alias, attacked and damaged around twenty African-American family homes in the county, causing heavy damage and administering beatings throughout the night but killed no-one.  This action prompted an increased Union Army presence and an increase in the Lebanon garrison.  (By John Osborne)