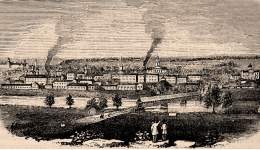 The Republican Party of New Hampshire met in Concord on January 3, 1866 to nominate candidates for state offices.  They also passed a series of resolutions that reflected the current state of post-Civil War politics early in the year.  Since this was their first convention since the assassination, the gathering mourned Abraham Lincoln's death and venerated his memory.  They also praised sitting President Andrew Johnson and pledged him their support in restoring the Union. They then nominated the sitting governor, Frederick Smyth, for another term. At the general election, Smyth won the vote and the legislature remained in Republican hands.  (By John Osborne)

How to Cite This Page: "New Hampshire Republicans meet in convention at Concord to nominate candidates for state offices.," House Divided: The Civil War Research Engine at Dickinson College, https://hd.housedivided.dickinson.edu/node/46079.