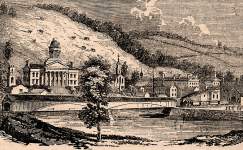 In the Vermont general election, Republicans swept almost all the state races and elected the three U.S. Representatives sent to the Fortieth Congress. Lieutenant Governor Paul Dillingham was elected governor with more than three-quarters of the votes cast and his party again controlled the state legislature, holding all thirty seats in the upper house and 224 of the 237 seats in the lower.  Worthington Smith and retiring U.S. Senator Luke Poland went to the U.S. House of Representatives for the first time and Frederick Woodbridge was re-elected there.  (By John Osborne)