On Lake Ontario, a steamboat burns and twenty-three lives are lost. 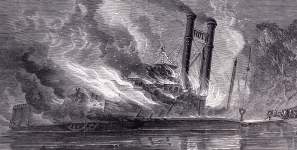 The sternwheel steamboat Wisconsin took fire on Lake Ontario near Grenadier Island while bound west from Ogdensburg, New York.  The fire resisted all efforts at control and the captain headed with all speed towards the shore while preparing to lower boats for passengers and crew.  Before the grounding could be made, however, two boats were launched prematurely and capsized, drowning those aboard.  In all, four crewmen and nineteen passengers lost their lives in the incident and the grounded Wisconsin burned to the waterline.  (By John Osborne)

House of Representatives, Report of the Secretary of the Treasury on the State of Finances for the Year 1868 (Washington, DC; Government Printing Office, 1868), 314-315.

How to Cite This Page: "On Lake Ontario, a steamboat burns and twenty-three lives are lost.," House Divided: The Civil War Research Engine at Dickinson College, https://hd.housedivided.dickinson.edu/node/46297.