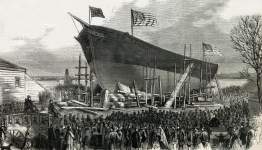 Built for the Boston to Liverpool run of the American Steamship Company, the 325 foot, 2000 ton S.S. Erie was the largest wooden screw steamship ever built.  The completed vessel had a chequered career.  Her company's owners going bankrupt before she could make a single Liverpool run, the Erie sat in dock till sold to the United States and Brazil Mail Steamship Company.  She was burned at sea on New Year's Day, 1873 along with a cargo of coffee worth $1,500,000.  (By John Osborne)

How to Cite This Page: "A Massachusetts shipyard launches the S.S. Erie, the largest wooden screw steamship ever built.," House Divided: The Civil War Research Engine at Dickinson College, https://hd.housedivided.dickinson.edu/node/46474.