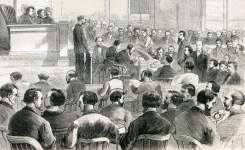 The fugitive John Surratt, wanted in connection with the Lincoln Assassination conspiracy that had resulted in the conviction and execution of his mother, Mary Surratt, had been arrested in Alexandria, Egypt after almost two years on the run.  He was returned to the United States aboard the USS Swatara on February 19, 1867, still wearing the uniform of the Pope in whose military he had enlisted, at the U.S.Navy Yard in Washington, D.C. He was formally indicted and on this day underwent the first day of his trial for murder before a civilian federal court.  The end result was a mistrial after his jury deadlocked and Surratt once again became a free man.  (By John Osborne)