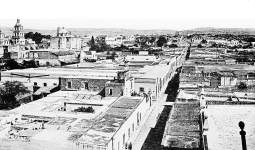 Querétaro, in central Mexico and the last refuge of the forces loyal to the beleaguered Emperor Maximilian I, fell to the Liberal troops of Benito Juarez. Maximilian himself, along with his staff, made an attempt to flee the city but were captured the following day.  The Emperor and his two main remaining military commanders, General Miguel Miramón and General Tomás Méjìa, were tried by military tribunal the following month and executed by firing squad on June 19, 1867.  (By John Osborne)

How to Cite This Page: "Querétaro, the last bastion of Emperor Maximilian of Mexico, falls to insurgent Liberal forces.," House Divided: The Civil War Research Engine at Dickinson College, https://hd.housedivided.dickinson.edu/node/47498.