In Maryland, the Antietam National Cemetery is officially dedicated on the battle's fifth anniversary. 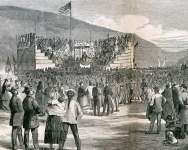 The newly completed Antietam National Cemetery near Sharpsburg, Maryland was officially dedicated on the fifth anniversary of the great battle.  President Johnson attended, as did former and sitting governors of the state.  Remarkable efforts at finding, identifying, and reinterring the Union dead had been underway for many months and the cemetery contained the remains of 3,580 officers and men of the Union Army.  Burial of remains from both sides had been in the original plan but Confederate dead were removed to other cemeteries in Hagerstown, Frederick, and Shepherdstown, Maryland since, according to the National Park Service, embittered feelings in the still divided state had precluded Maryland's willingness or fiscal ability to participate.  (By John Osborne)

How to Cite This Page: "In Maryland, the Antietam National Cemetery is officially dedicated on the battle's fifth anniversary.," House Divided: The Civil War Research Engine at Dickinson College, https://hd.housedivided.dickinson.edu/node/47647.