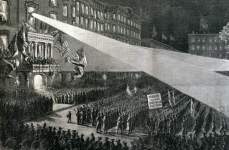 General Philip Sheridan had just been appointed to command the U.S. Army's District of the Missouri, with the mandate to subdue the Plains Indians obstructing the construction of the transcontinental railway and emigration west.  More importantly from many Republicans, President Johnson recently had removed Sheridan from command of the Fifth Military District of Texas and Louisiana where he had been vigorously pursuing reconstruction. When the Albany, New York born Civil War hero made an autumn visit to New York City, lavish welcoming ceremonies had been laid on.  These included a remarkable evening gathering at the the Union League Club where Union Square was crowded with people and parading militia all illuminated with decorations and arc lights.  (By John Osborne)