Baltimore holds the first elections under the new Maryland constitution 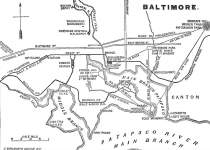 The first elections under the new Maryland Constitution of 1867 were held to elect judges, city council members, and a mayor in the city of Baltimore.  Robert Tunstall Banks, a conservative Unionist who was rejoining the Democratic Party ranks defeated the Republican mayoral candidate A.W. Denison, taking seventy-five percent of the vote.  Democrat also controlled most city offices. it would be 1885 before a Republican was again elected mayor of Baltimore.  (By John Osborne)

How to Cite This Page: "Baltimore holds the first elections under the new Maryland constitution," House Divided: The Civil War Research Engine at Dickinson College, https://hd.housedivided.dickinson.edu/node/47775.