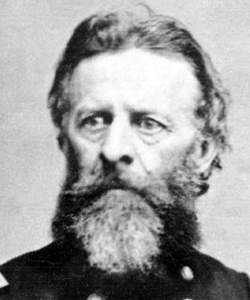 Born in Virginia, Philip Cooke was a Union general whose own son, and both son-in-laws, one of whom was J.E.B. Stuart, served in the Confederate army. Cooke was known as the "Father of the U.S. Cavalry" and spent numerous days before the war in Carlisle at the army's cavalry school. (By Don Sailer)
Life Span
06/13/1809 to 03/20/1895
How to Cite This Page: "Cooke, Philip St. George," House Divided: The Civil War Research Engine at Dickinson College, https://hd.housedivided.dickinson.edu/node/5465.