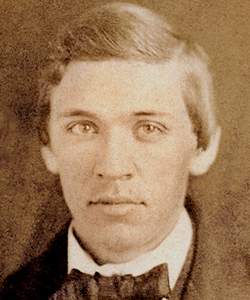 Thomas Gunn was a Kentuckian, from Shelby County, the son of a Presbyterian elder, and himself with a long future as a clergyman ahead of him. Soon after graduation from Dickinson in 1860, he became a professor of languages at a Methodist college in Clarkesville, Texas. Within a year, though, he was enlisted as a private in the Union army.