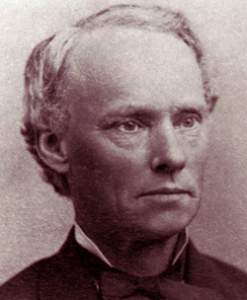 Robert Miller Henderson was a Pennsylvania lawyer who became a citizen soldier and a natural leader on the battlefields of the Civil War. He was born in North Middleton Township, Pennsylvania, the eldest son of William and Elizabeth Henderson in March 1827. He graduated from the local Dickinson College in 1845, studied law, and passed the bar in August 1847. He was still only twenty-five years old when he was elected as a Whig to the Pennsylvania House of Representatives in 1851, serving two terms. In April 1861, Henderson helped raise a unit of volunteers called the "Carlisle Fencibles," later Company A of the Seventh Pennsylvania Reserve Infantry, and was elected their captain. The Seventh fought in Virginia in 1862, with Henderson cited for gallantry and rising to command of the regiment. His combat service came to an end when he suffered a serious chest wound at the Second Battle of Bull, in August 1863. Upon recovering, Henderson was named in April 1863 as Provost Marshal for Cumberland, York, and Perry Counties. Responsible for the difficult task of enforcing the new draft, he served in this post until the end of the war. In March 1865 he was named as a Brevet Brigadier General of Volunteers in recognition of his gallant conduct at Bull Run. After the war, he sat as judge of the Twelfth Judicial District of Pennsylvania and was also president of the Pennsylvania Antietam Battlefield Memorial Commission in 1905. He died at his home in Carlisle in January, 1906. (By John Osborne)
Life Span
03/11/1827 to 01/26/1906
Dickinson Connection
Class of 1845
How to Cite This Page: "Henderson, Robert Miller," House Divided: The Civil War Research Engine at Dickinson College, https://hd.housedivided.dickinson.edu/node/5873.