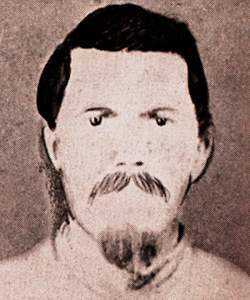 William T. Kinzer was born in Blacksburg, Virginia. He entered Dickinson College Grammar School in 1856 before becoming a member of the Class of 1860 later that fall. In 1857, Kinzer’s father died and, having lost his financial support, he left Dickinson to study and practice law in Virginia as well as the Nebraska territory. He joined the 4th Virginia Infantry in 1861 and received the ranking of first sergeant, corporal, and, by 1863, fourth sergeant. Kinzer saw action in Chancellorsville in May 1863 and Spotsylvania in May 1864. One month after his capture, on July 15, 1864, Kinzer died at Point Lookout Prison in Maryland. (By John Osborne and Brandon Rothenberg)
Life Span
01/01/1837 to 07/15/1864
Dickinson Connection
Class of 1860
How to Cite This Page: "Kinzer, William T.," House Divided: The Civil War Research Engine at Dickinson College, https://hd.housedivided.dickinson.edu/node/6036.