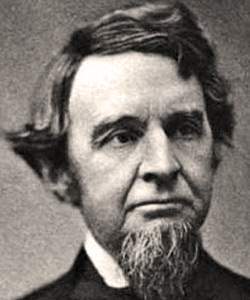 Pennsylvania farmer's son James Miller McKim was a giant of the anti-slavery movement. He worked to end slavery, help fugitives escape it, and, when it was ended, aid those who had been freed. The second of eight children born on a farm near Carlisle, McKim entered Dickinson College at age thirteen in 1824 and graduated in 1828. He became a Presbyterian minister and began to work across Pennsylvania to form local anti-slavery groups. By 1838 the Pennsylvania Anti-Slavery Society had been founded and soon after McKim moved to Philadelphia to edit the organization's journal. About the same time, he married Sarah Speakman, a Quaker, with whom he had two children, including a daughter, Lucy, who married the son of William Lloyd Garrison. In Philadelphia, McKim also met William Still and joined his Philadelphia Vigilance Committee and its work to aid the Underground Railroad passing through the city. McKim was cautious and careful in personality but his actions were always, in the end, those of a radical abolitionist. He departed Presbyterianism in disgust at its ambivalence over slavery, supported the family of John Brown after Harpers Ferry, and recruited African-American regiments during the Civil War. In 1865, he moved to New York City as the first secretary of the American Freedman’s Union Commission, founding The Nation to help publicize the needs of the newly emancipated. After a lifetime of almost constant effort, he died in Orange, New Jersey in 1874. (By John Osborne)
Life Span
11/10/1810 to 06/13/1874
Dickinson Connection
Class of 1828
How to Cite This Page: "McKim, James Miller," House Divided: The Civil War Research Engine at Dickinson College, https://hd.housedivided.dickinson.edu/node/6231.