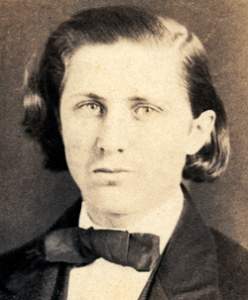 George Baylor was a seventeen year old student at Dickinson College in Pennsylvania as his father, Robert Baylor, led the Virginia Militia against John Brown at Harpers Ferry in 1859. When the Civil War broke out the young Baylor became himself one of its most resourceful junior cavalry leaders. One of eight children in a quintessential Jefferson County, Virginia gentry family, Baylor graduated in 1860 and taught school as he prepared for a law career. In April 1861 he enlisted immediately and served with the famous Stonewall Brigade as an infantryman at First Bull Run. Always a horseman since childhood, he was far happier when he became a second lieutenant in a unit his father raised called "Baylor's Horse," later Company B, 12th Virginia Cavalry. The diminutive, 120 pound Baylor had three successful and eventful years as a Confederate cavalryman. Captured and exchanged once, wounded several times, he rose to command Company B with distinction. Later in the war he raided Union communication lines with the 43rd Virginia under Mosby, especially along the Baltimore and Ohio railway network. Unlike his father and two elder brothers, who were killed, George Baylor survived the war to take up, finally, his legal studies at Washington and Lee University. He built a lucrative legal career that culminated in his appointment as chief legal counsel for the B. & O. Railroad, the line that he had raided with such enthusiasm as a young man. George Baylor died in March 1902 and is buried in Charlestown, West Virginia. (By John Osborne)
Life Span
02/13/1842 to 03/06/1902
Dickinson Connection
Class of 1860
How to Cite This Page: "Baylor, George," House Divided: The Civil War Research Engine at Dickinson College, http://hd.housedivided.dickinson.edu/node/5059.