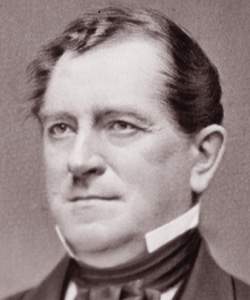 Joshua Giddings was an anti-slavery congressman who became a hero to the abolitionist movement when he resigned his seat in Congress in 1842 following a censure for his role in the Creole case, an incident concerning a slave uprising at sea, only to win back the seat through a special election. Giddings was a Whig who befriended fellow Whig Abraham Lincoln when they served together in Congress during the late 1840s. Giddings later became a leading Republican during the 1850s and served as a minor diplomat for the Lincoln Administration during the Civil War. (By Matthew Pinsker)
Life Span
10/06/1795 to 05/27/1864
How to Cite This Page: "Giddings, Joshua Reed," House Divided: The Civil War Research Engine at Dickinson College, https://hd.housedivided.dickinson.edu/index.php/node/12002.