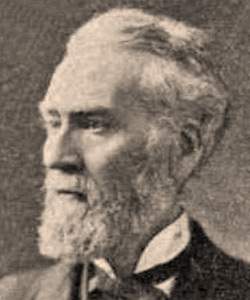 A Canadian by birth and the child of Irish immigrants, Joseph Medill was a principal figure in Illinois politics as owner and editor of the Chicago Tribune. Born in New Brunswick and raised in Ohio, Medill began his career as a lawyer before becoming interested in both politics and journalism. Medill began his newspaper career as a staunch Whig editor for a series of Ohio papers he owned with his brothers. After the Whig party collapsed in the mid 1850s, Medill became a key figure in the formation of the new Republican Party. In 1855 Medill became the managing editor and principal owner of the Chicago Tribune alongside Dr. Charles H. Ray. The Tribune was central to Abraham Lincoln’s 1860 nomination for president by the Republican Party. At the Republican National Convention in Chicago, Medill was one key figure in convincing uncommitted delegates to support Lincoln, ensuring the nomination for the Illinois lawyer. Medill was a Lincoln supporter during the Civil War, although at times he was impatient with the president’s policies on emancipation, confiscation, and the use of African Americans for the war effort. In 1865 Medill lost control of the Tribune and ventured into politics and government, most notably as mayor of Chicago. In 1874 he regained full control of the Chicago Tribune and the paper continued to support Republican national policies and Chicago business interests. Medill remained in control of his paper until his death, a vigorous Republican to the end. (By Ben Lyman)
Life Span
04/06/1823 to 03/16/1899
How to Cite This Page: "Medill, Joseph Meharry," House Divided: The Civil War Research Engine at Dickinson College, https://hd.housedivided.dickinson.edu/index.php/node/24004.