At the House of Delegates in Richmond, the Virginia Convention votes for secession 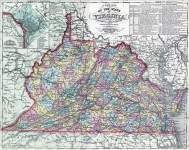 04/17/1861
The firing on Fort Sumter and President Lincoln's resultant call for volunteers swiftly motivated the Virginia Convention meeting in Richmond to vote an Ordinance of Secession. Just thirteen days before, a motion for secession had been heavily defeated, now the resolution passed 88 to 55, with a ratification referendum scheduled for May 23, 1861.  Western Virginia representatives remained heavily opposed to the action.  (By John Osborne)
Source Citation
Nelson D. Lankford, "Virginia Convention of 1861." Encyclopedia Virginia. Virginia Foundation for the Humanities. 10 Jan. 2011 <http://www.EncyclopediaVirginia.org/Virginia_Convention_of_1861>.
How to Cite This Page: "At the House of Delegates in Richmond, the Virginia Convention votes for secession," House Divided: The Civil War Research Engine at Dickinson College, https://hd.housedivided.dickinson.edu/index.php/node/35957.