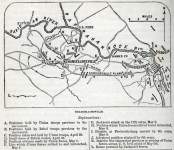 04/27/1863 - 04/30/1863
The Army of the Potomac under General Joseph Hooker crossed the Rappahannock and the Rapidan and began to concentrate near Chancellorsville in Spotsylvania County, Virginia for an assault on Robert E. Lee's Army of Northern Virginia.  Hooker hoped to envelop Lee with the help of two corps from Fredericksburg under General John Sedgwick.  Meanwhile, cavalry commander General Stoneman was dispatched to raid in the rear of the Confederate forces.  (By John Osborne)
Source Citation
Stephen W. Sears, Chancellorsville (New York: Houghton Mifflin Company, 1996), 139-171.
How to Cite This Page: "The Army of the Potomac concentrates on Chancellorsville in preparation for an attack on Lee ," House Divided: The Civil War Research Engine at Dickinson College, https://hd.housedivided.dickinson.edu/index.php/node/39337.